Figure 1-a to 1-c shows current path in a buck converter circuit. In Figure 1-a, the red line illustrates the main current flow in the converter  when  switching  element  Q1 is ON. CBYPASS is a decoupling capacitor for high frequency and CIN is the capacitor with  large  capacitance.  The  instance  when  the  switching element  Q1  is  turned  ON,  most  of  the  steep  part  of  current waveform is supplied by CBYPASS and then from CIN.

In Figure 1-b, the red line illustrates the condition of current flow when  the  switching  element  Q1  is OFF. Free-wheel  diode  D1turns ON and energy stored in inductor L gets released to output side. For Buck converter topology, since inductor is inserted at output in series the output capacitor current is smooth.

Refer  Figure  1-c,  the  red  line  shows  the  difference  between Figure 1-a and 1-b. Current in this red line changes violently each time the switching element Q1 changes from OFF to ON, and vice versa. These sharp changes induce several harmonics in  the  waveform. This  difference  in  system  needs  to  be  paid maximum attention during PCB layout and an important caution point.

General points of PCB layout procedure are as follows.

1. Place input capacitor and free-wheel diode on the same PCB surface layer as the IC terminal and as close as possible to IC.

2. Include thermal via if necessary to improve heat dissipation.

3. Place inductor close to IC, no need to be as close as input capacitor.  This  is  to  minimize  radiation  noise  from  the switching node and  do  not expand copper  area more than needed.

5. Keep wiring of return path away from noise causing areas, such as inductor and diode.

First of all, start placing the most important parts, such as the input capacitor and free-wheel diode. A Single ceramic capacitor may serve as both CIN and CBYPASS for smaller capacitance value of input capacitor, in designs with small current power supply (IO≤1A). This is because the frequency characteristics get better,as  ceramic  capacitor’s  capacitance  value  gets  smaller.  But ceramic  capacitor  has  different  frequency  characteristics,  so confirming it for actual parts being used is important.

Figure 3-a shows layout example for a suitable input capacitor.Place CBYPASS near IC terminal on the top layer. As in Figure 3-b, large capacitance capacitor CIN can be separated about 2cm from  CBYPASS  that  supplies  most  of  the  pulse-current.  When difficulty in space occupied, and if cannot place CIN on the same surface as IC, it can be placed at the bottom layer through vialike in Figure 3-c. Risks regarding noise can be avoided with this, but there is a possibility of ripple-voltage to increase at high-current, influenced by via resistance.

Figure 3-d shows the layout of CBYPASS and CIN placed on the reverse  side.  In  such  case,  voltage  noise  is  created  by inductance of the via, and the bypass capacitor operates as a reverse effect. Do not carry out this kind of layout design. 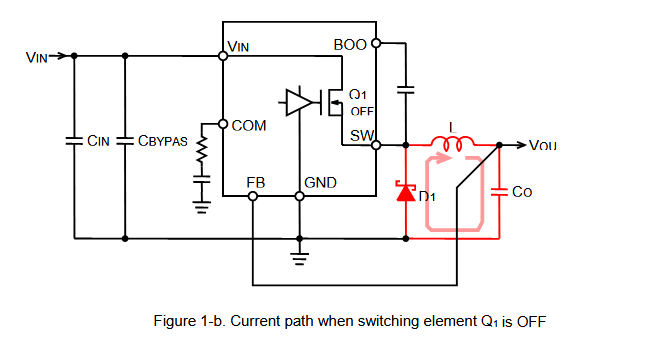