The LeCroy QPHY-DDR3 Test Solution is the best way to characterize DDR3 memory interfaces. Capable of performing measurements on 800 MHz, 1066 MHz, 1333 MHz, 1600 MHz and custom speed grades, QPHY-DDR3 has a full suite of Clock, Electrical and Timing tests as specified by the JEDEC Specification.

Due to the high level of variability in DDR3 measurements, it is important to measure a large number of cycles. By measuring a large number of cycles in a very short period of time, the user can be more confident that they are catching the true maximum and minimum points for their measurement. In many cases, QPHY-DDR3 will perform several thousand measurements in the same time competitive equipment will perform less than 100. This allows you to achieve statistical relevance in a single run of QPHY-DDR3 without requiring multiple acquisitions over a long period of time.

Using the “Stop on Test” capability built in to QPHY-DDR3, the user can pause the testing at the completion of each individual test. QPHY-DDR3 will prompt the oscilloscope to save the panel file to preserve the current state of the oscilloscope. The user is then free to perform additional debugging of any particular test to aid root cause analysis. Root causes of failure can be quickly and easily found using all of the advanced serial data tools within the oscilloscope. These include: SDA II, Eye Doctor™ II, WaveScan™, Histograms, Tracks and many more - making it easy to correlate anomalies with other observed behaviors. Once the user has completed debugging that particular test, they simply click on the “Ok” button in QPHY-DDR3 to resume running the remainder of the selected tests.

Shown above, the SRQ test measuresthe slew rates of the data, strobe and clock signals. A 2 Mpt acquisition was taken and all of the read bursts were identified. Then every rising edge slew rate was measured. In this case over 9000 slew rate measurements were performed. Shown above, the worst instance of this measurement is displayed on the screen. Additionally, the “Stop on Test” ability can be used to perform further analysis on this test to determine the root cause of a failure.

Shown above, the tDQSCK test verifies that the strobe output access time from the clock signal. Similar to the electrical tests, a 2 Mpt acquisition was taken and all of the read bursts were identified. Then the time between every strobe edge and its associated clock were measured. In this case over 10000 tDQSCK measurements were performed. Shown above, the worst instance of this measurement is displayed on the screen. An additional probe can be utilized to capture a separate signal on the board to aid in failure analysis.

Eye Diagrams are a powerful tool for debugging serial data signals. QPHY-DDR3 enables the user to create eye diagrams of both the Read and the Write data bursts to ensure that the signal integrity is sufficient such that the data will be sampled properly by the receiver. Additionally, the Eye Diagram for the Data Signal and the Strobe signal are shown at the same time to ensure proper strobe timing.

QualiPHY is designed to reduce the time, effort and specialized knowledge needed to perform compliance testing on high-speed serial buses. 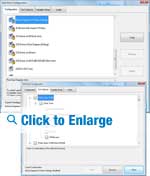 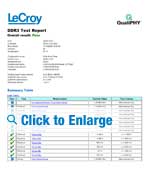